Slides which accompanied my pretty random rant about Women in Tech at the Girls in Tech meetup during European Code Week on October 16, 2014 in Amsterdam, The Netherlands.

Below you'll find the notes of what I actually intended to convey ;-)

So what is it about the tech culture that drives women away and makes the barrier ‎for entry so high ?‎ Well the short of it is: we don't fit in, we are the odd ones out.‎

We are too often not taken as seriously as our male counter-parts, sometimes just ‎ignored altogether, other times letched after and unfortunately we still get too ‎often thought of as part of the location, hr or other non-tech staff.‎

In short: We are not white males.‎

The best way to counter-act this, is of course to get more women into the industry, ‎but that's a chicken-egg situation.‎ In the mean time, it's up to us.‎

When I look around at techy user group meetings or conferences, generally the ‎women I see are either standing alone somewhere, making themselves as small ‎as possible or clinging to a male collegue they came in with, or trying to fit in, ‎dressing in the typical male tech uniform of jeans and a tech shirt and trying to ‎compete in a verbal "mine is bigger than yours" competition.‎ While I believe everyone has to do what's right for them to feel comfortable or in ‎this case, possibly - less uncomfortable -, I'd also like to warn about ‎compromising yourself just to fit in.‎

We are women. Some of us are single, others in a relationship or married. Some ‎of us are mothers. Some of us are hetero-sexual, some are lesbian, some bi-‎sexual or transgender. Some of us are studying, some have just started a career, ‎others are well on their way. We come from different towns, different backgrounds, ‎different religions and maybe even different countries.‎ But we are all women. And there should be no need for any of us to hide that fact ‎just to 'fit in'.‎

To be true to yourself and still 'survive' being part of the tech industry isn't always ‎easy. As women we've been brought up to be on guard for our personal safety. ‎To be wary of large groups of men, to always be very aware of our surroundings ‎as danger may lurk in every corner. And we are right to be wary. One in every 2 to ‎‎3 women will encounter some form of sexual intimidation or assault during their ‎lifetime and some will encounter this more than once.‎

So it's not strange at all that we as women feel discomfort when we join the tech ‎industry. It's intimidating joining a tech company or going to a tech meeting and ‎being the only woman or one of only a handful of women there.‎

To illustrate what I mean by this for all the men here, let me recount a telling ‎example I encountered while the #yesallwomen movement was at it's high at the ‎end of May this year.‎

‎"Imagine I have a 100 cocktail glasses here, I fill them all up with a nice little ‎cocktail and offer you one. Before you drink from it, though, I tell you that 98 of ‎them are absolutely safe to drink, however, two of them contain cyanide and will ‎kill you in seconds.‎ Would you still drink it ?"‎

All men I've told this example to, respond with a resounding "NO" and rightfully so. ‎But that is exactly the same dynamic women encounter every single day in the ‎tech industry.‎

Now just to be clear, this is not meant to discourage you from going into the tech ‎industry. I believe, that when we - both men and women - understand the dynamic ‎better, we will be better equipped to counter-act it.‎

So what can we all - both men and women - and yes, gentlemen, I very much ‎include you in this - do to change this dynamic and to lower the barrier of entry ‎for women ? Well, one thing I have personally found very effective is to actually ‎make all newcomers feel welcome. When you attend a tech meeting, don't just ‎spend all your time during the drinks catching up with the people you already ‎know. Look around you, go up to someone who is new at the meeting and ‎welcome them. Introduce them to some more people and most importantly, treat ‎them as your peers, as fellow developers.‎

Another thing you can do - if all this meeting stuff sounds ‎really intimidating -, is: use the internet. The internet after all can be quite ‎anonymous if you want it to be. Choose a gender neutral nickname, study open ‎source code, contribute to it by reporting bugs, sending in pull requests, adding ‎unit tests, writing documentation or creating translations. I personally found this a ‎low-key way to learn an incredible amount about the technologies which ‎interested me while at the same time allowing you to build up your CV. Then, ‎once you know some people through online interaction, it will be a lot less ‎intimidating to dive into the community.‎

I sincerely believe that having more diversity - in the broadest sense of the word - ‎in the tech industry will improve the code we write, will improve the usability of ‎applications, will lessen the amount of bugs, will increase profitability and will also ‎improve the atmosphere in the work place.‎

So, thank you for being here and I hope to still see all of you at meetings like this ‎and more in-depth ones in five years time.‎ 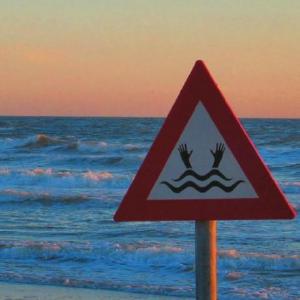 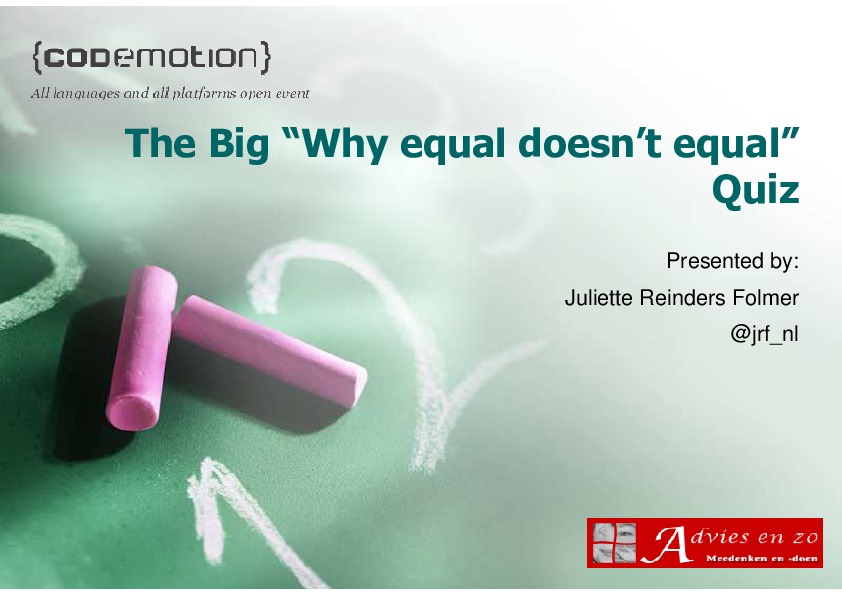 Presented on November 28th 2014 at the CodeMotion Conference, Milan... 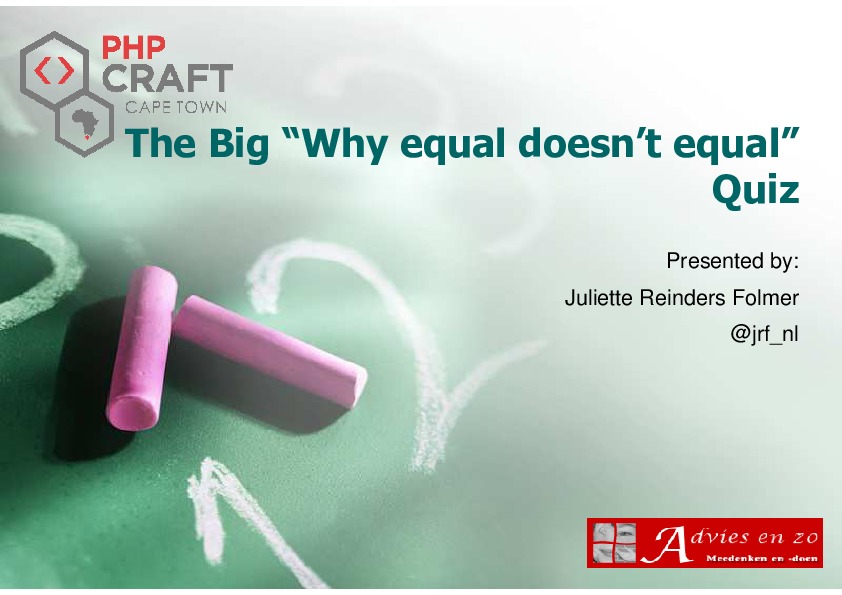 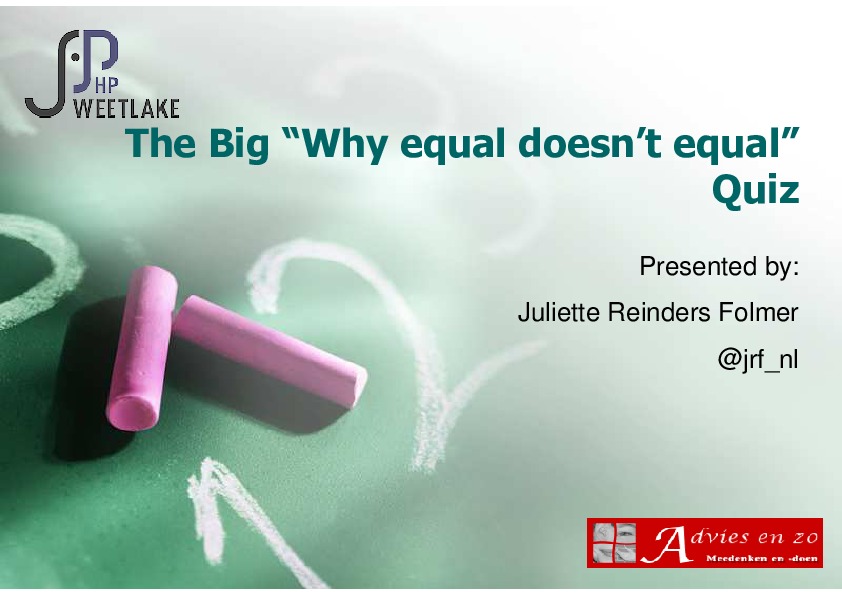 Presented on July 4th 2014 at the Sweetlake PHP Meetup, Zoetermeer,... 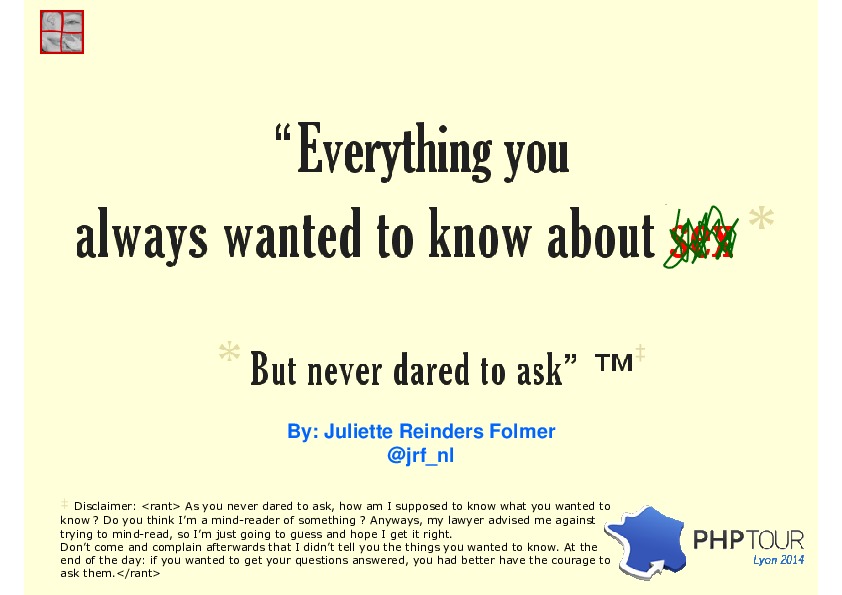